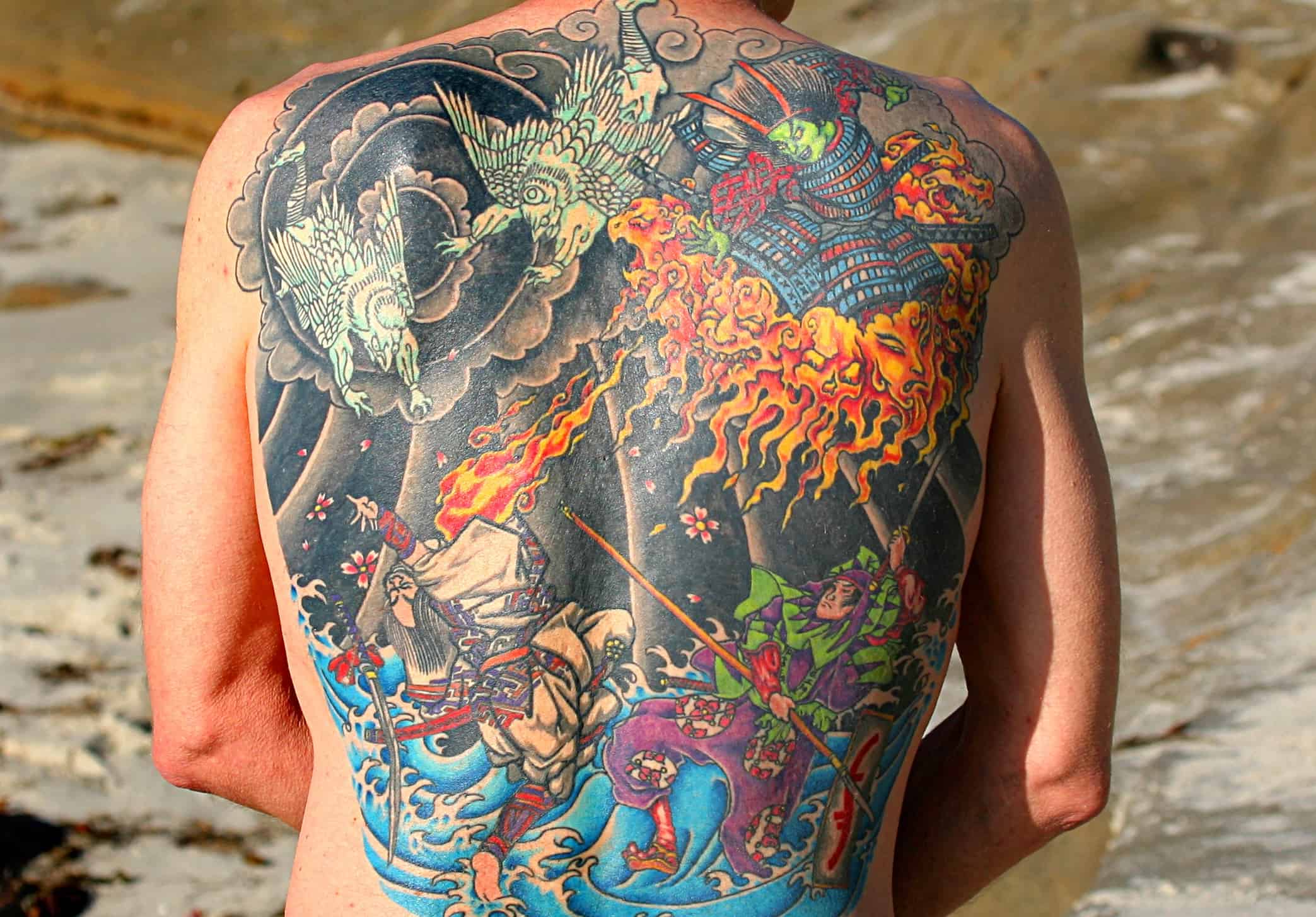 Fire tattoos are popular because they look awesome. But most people don’t know that there’s a deeper meaning behind the fire tattoos they get.

For most, it’s probably just aesthetic appeal, but for some others it can be a symbol of passion and burning desire to achieve something great in life.

In this article I’m going to talk about what these tattoos mean and how their symbolism can change depending on the color of the flames or whether they have smoke or not.

What is a Fire Tattoo?

A flame tattoo is a tattoo that has a stylized drawing of a flame as its main design. They can be realistic or abstract and they look awesome because fire is seen as both powerful and dangerous at the same time (at least when it comes out of your stove, not so much when you want to light up a cigarette).

Before we dive deep into the symbolic meaning of different types of fire tattoos, I think it’s important to understand that when people get a tattoo, they aren’t just getting inked.

They’re making a commitment to themselves and their future. A sort of promise that they will always strive for something more no matter what life throws at them.

Here are some of the variations of flame tattoos that you should know about:

The flame is probably one of the most popular types of fire tattoos out there; and with good reason too. It represents light, warmth and passion (especially when red).

Flame tattoos can symbolize many things: rebirth like a phoenix rising from the ashes; passion, drive and desire; strength; change; control over emotions ; power; light etc.

These are flames that have both ends on fire. They can be seen as representing passion, energy or even the process of change since they’re always moving forward. Since fire burns everything in its path, these flames can also symbolize how life has destroyed all your hopes and dreams which makes them perfect for people who are depressed or pessimistic.

Flames with something inside

These tattoos consist of three things: the flame itself, a dark space (usually black) and an object that’s sitting inside the fireball. The symbolism behind this design is pretty straightforward since it implies that you want to burn down certain aspects of your life because they’ve hurt you deeply (the darker the color used , the more intense that feeling is).

Flames without anything inside

This flame tattoo design consists of only the flame and its shape which makes it look like a fire tornado. The symbolism behind this design can also be easily explained since it usually implies a deep-seated anger. The only difference between this tattoo and those with something inside is that these flames need to burn everything in their path whereas the other version burns certain aspects of your life.

This tattoo has multiple copies of the main element – the flame itself. In most cases, each copy looks different which means that they’re supposed to represent an aspect from one’s personality or spiritual beliefs. Since there are so many differences between these flames, their meaning

Some good meanings behind a fire tattoo are:

A flame tattoo can represent passion. When someone is passionate about something it means that they have a desire to achieve something great with their lives; whether it’s to follow their dream career, be successful in business or simply live life to the fullest.

Fire tattoos are sometimes associated with strength because fire is one of the most powerful elements out there. If you’ve ever seen the movie “The Scorpion King” (if not, stop reading and go watch it), you will probably remember all those cool creatures like scorpions and snakes made of fire (it’s an awesome movie I swear).

Fire tattoos are usually quite detailed and have some sort of texture to them, showing that the person who has it not only wants to control his emotions but also likes some detail in their overall look.

A fire tattoo can also symbolize change because when fire develops it adapts its form to whatever object or surface it’s on.

Some bad meanings behind fire tattoos are:

Fire tattoos can represent destruction as well. This is the negative aspect of fire because when uncontrolled it cause a lot of damage, burning everything in its path.

Another way to interpret a fire tattoo is that it symbolizes uncontrolled rage and anger. Fire is a powerful element that cannot be contained or controlled easily which makes it a perfect symbolism for anger and rage because those too are difficult to control.

If you want to get a tattoo that’s meaningful, then the color of the fire is important. Some colors mean different things than others, so be aware of this before you make your final decision.

Below are some popular colors with their meanings:

Red: Passion, strength, energy and courage – which makes sense since red is the first color of our vision spectrum. It’s also associated with love and desire.

Orange: Energy, warmth and determination – orange corresponds to an individual’s will to live out his dreams. It can also represent change due to its association with creativity since orange symbolizes both passion through creativity as well as ambition.

Green: Growth, life, health, abundance and wealth – green is the color of nature after all. It’s also a symbol of envy or greed since it can represent a desire to have more than what you already have.

Purple: High ideals, ambition and extravagance. In many cultures purple has been associated with royalty due to its price whereas in Japan it’s an important wedding color that represents happiness since brides wear this color on their wedding day.

Best Body Part to Get a Fire Tattoo

Fire tattoos look awesome on any body part. Many people choose to get them on their chest, arms or ribs but the choice is yours. Just make sure that you wear your bikini confidently because once it’s done, it can’t be undone… well not without laser anyway.

There are many different designs for flame tattoos. You can choose whatever design you like or you can base it on the symbolism of fire. Here are some ideas for inspiration:

A simple shape like a triangle, circle or square is perfect if you want to emphasize the overall look of the flame rather than its details. These shapes also don’t have any meanings associated with them but could still make a valuable tattoo since not everyone wants to get theirs with lots of symbols and other artistic elements.

An abstract flame tattoo shows off an artist’s creativity which makes it more valuable because there aren’t many abstract tattoos out there. In addition, abstract designs also symbolize self-expression which is valuable to everyone who wears life on their sleeve.

A very popular tattoo design that became famous thanks to Christian tattoo artists who used it as a way to represent their faith. A burning cross is often associated with Jesus Christ’s crucifixion and represents how he died so we can have life everlasting.

The heart is a symbol of love , affection, passion and dedication. It can also be seen as a representation of your own heart which is why it makes a great tattoo for those who want to emphasize the importance of these feelings in their lives.

A nature flame tattoo incorporates many different elements from nature including but not limited to the sun, moon, stars, mountains, flowers and trees into one artistic composition that symbolizes endless beauty.

If you’re thinking of getting a flame tattoo, make sure you do your research, pick the right artist and choose a design that’s both meaningful and suitable for your personality.