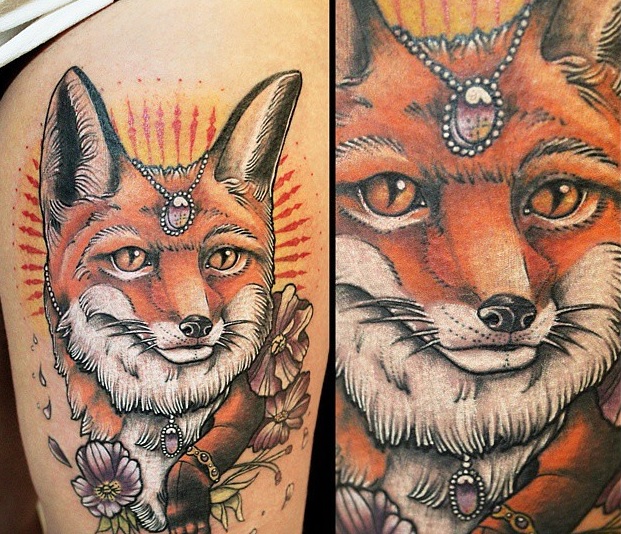 One of the most misunderstood canines, foxes have a long, historic presence in mythology. Smart, sometimes cunning animals, foxes are present across the world in some form or another, but their traits remains the same.

Because of it’s nature, there are many legends, traditions, and mythologies surrounding this incredible wild animal. From the Japanese kitsune to the Native American trickster, foxes are associated with many different tales over the centuries.

With all this said, here are the most popular traits that pop up over and over again when it comes to the meaning of fox tattoos across different cultures:

Now we’ll elaborate on each of these individual traits.

Wisdom: the ability for foxes to adapt is a very popular trait seen in people that are good writers.

Intelligence: Someone who is as wise as a fox usually knows how to make the best of every situation.

Femininity: most cartoon characters that feature a female fox seem to always have beautiful eyelashes and a seductive aura about them.

Sexuality and fertility: its tail is commonly connected to fertility and sexuality

Adaptability: the fox, most of the times, can take the positive out of the situation, even when things are not going well

Wealth: the fox tends to be rich in not only money but also wisdom, all of the most positive traits

Instinct for survival: the fox knows exactly what to do in situations that could be important for it’s life

Korean: In the Korean culture, the fox is a symbol of feminine energy and the female sex.

Ukrainian and Russian: In Russia and Ukraine, the fox is associated with traits such as deceit, corruptness, seduction, and cunningness.

Roman: In ancient Roman culture, the fox has a bad reputation. It was seen as a demon and a spreader of evil.

Scandinavian: In the Scandinavian culture, people named the fox, “Loki” who was the god of disobedience and deception or corruption.

Chinese: The Chinese believed that the fox was a symbol of luck and longevity. For men, the fox tattoos were a representation for a long life in happiness. The fox was a negative symbol for females (unfaithfulness). The longer the fox lived, the more powerful it becomes and the more tails it gets. A 9 tailed fox symbolizes protection from unrequited love. A nine tailed fox would also be wealthy.

Japanese: Although the fox tattoo is a symbol of wealth and fertility regardless of the country. Japanese people worshiped the animal and believed it to be a messenger from God. Fox tattoos are especially popular among businessmen. The Japanese style of this tattoo also means that a person is self-improving, improving the powers of observation and courage.

Indians: a tribal fox tattoo is a protection of all humans without exception. The fox was a sacred creature which helped to find medical herbs and was taught to hunt. A good hunter and fox tattoos were common together in many tribes.

Who Should Get a Fox Tattoo?

According to the statistics, fox tattoos are most commonly worn by women. Although men sometimes have modified versions of a fox tattoo. For men, it is better to choose more “masculine” positions of the animal like a kung fu or karate pose. Men should avoid foxes with body curves and emphasize the grin as a sign of strength and ability to fight. In men, the foxes can be a symbol of monogamy because foxes choose one partner for life and die alone if the partner dies.

The Fox as a Trickster

Many people know of the old Native American tales and legends that have been passed down by people over the centuries. For the Native Americans, the fox was definitely portrayed as a trickster, one that was always up to no good. As an intelligent animal, this trickster would always find a way to outsmart the humans and thus earn the mischievous nature they are now known for.

Believe it or not, there is actually a tribe of Native Americans that are known as the Fox tribe of Meskwaki. These Native Americans originated in the Great Lakes region and what is now present-day Ontario Canada.

Their “Fox” name was only given to them after a translation mistake by French settlers in their native area, so the accuracy of the name is obviously questionable. However, like most other Native tribes, the Meskwaki of course had contact with the fox at some point.

Because of the timid and elusive nature of foxes, most people have never seen one in the wild. This may be the beginning of a lot of their mischievous tendencies, as they are incredibly difficult to hunt in the wild.

Foxes usually live up to three years in the wild, but sometimes as long as ten. A majority of their diet comes from smaller reptiles, insects and eggs making them omnivorous and opportunistic.

A fox hunts in a way similar to a cat, using stalking and then a pouncing technique to ambush their prey. In this method, they can camouflage themselves to their prey before surprising them.

The fox images look great in both black and white designs, as well as in geometric tattoos. Obviously the fox is most  beautiful in orange and red colors, with a big and bushy tail.

Keep in mind that the look and positioning defines the entire meaning of the tattoo:

We hope that you liked our guide on fox tattoos. Let us know in the comments below if we missed anything.