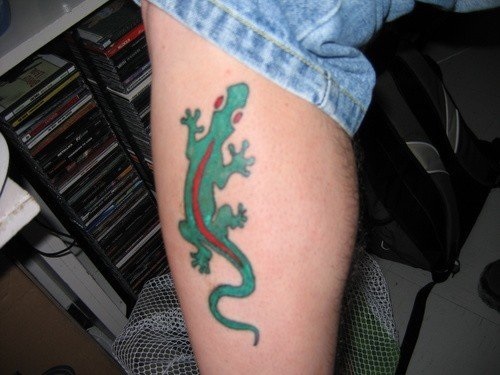 Lizard tattoos are a great way to express what you’re feeling. If you want to show everyone that you have an adventurous spirit, then a lizard tattoo might be the perfect option for you!

Lizards are some of the most interesting species of animals in the world. With over 6,000 known species across four different families (iguanas and chameleons, monitor lizards- monitors and iguanas with a closed throat), they fall into the category known as ‘squamate reptiles’.

Lizards are carnivorous animals that typically hunt for their prey. They wait and sit as close to their food source as possible before attacking, and will eat small insects while larger members of the family such as Komodo dragons devour anything from lizards to large mammals.

The lizard has been a prevalent image in human culture since the dawn of time; it ranges from Egypt and Greece where the lizard is associated with good fortune.

Lizard paintings are found in a few different areas–primarily on the exterior of houses and around them. This is done to act as a talisman, much like an animal spirit.

The lizard is easily observed for its unique characteristics and abilities, so it makes for a great image for tattoo.

What Does a Lizard Tattoo Mean?

Tattoos of lizards are a great way to express key personality traits and deep symbolism. The Lizard represents:

Within many cultures, the lizard is a symbol that emits positive energy. Not only does the image of a lizard produce such energy, but in other facets of life we could learn from some of its characteristics.

Lizards are incredibly fast, making them a good symbol to represent someone who values speed.

The first thing you may think of when it comes to a lizard is probably not how fast they are. They are definitely very quick though, and move in a way that is that’s different from any other animal out there.

Some types of lizards and reptiles may not have legs but they still like to slither and escape. For example, the ‘green basilisk’ lizard is very fast runner who can cover up to 1.5 meters per second and even runs across water. The name ‘Jesus lizard’ comes from its ability to run on water.

You probably never noticed this, but lizards are surprisingly flexible. From how they can easily squeeze into any crevice to the way they change colors and shape with so little notice, these small reptiles have a lot of similarities to humans when it comes to being adaptable; both physically and mentally.

Being a flexible person shows that you are able to make things work no matter what the circumstance are.

This tattoo symbolizes drive, persistence, and willingness to make an effort.

Perhaps one of the most impressive qualities about lizards that baffles people is their ability to grow back limbs. Lizards tend to have long tails, and those tails can get caught on things like rocks by accident.

Trapping the lizard, it is able to sacrifice and cut off its own tail to escape. The lizard cuts off its tail and escapes, but if given time to heal it starts growing back.

The symbolism of a lizard tattoo can be strong. This image of the reptile personifies its qualities and abilities, which is also how we humans are. A lizard’s ability to regenerate limbs symbolizes our growth as individuals.

Sometimes in life, we must sacrifice something to live a longer and better life. Just like the lizard sacrificing its tail to survive, we as humans do the same when making difficult choices. As bad as it may seem now – accepting one thing and losing another – you will be stronger than before.

Lizards are most often tattooed in their natural colors and postures, but the most popular image of a lizard is the crawling variety.

The design of a lizard tattoo can vary depending on the artist. Some are filled with colors and others have just black ink, but they usually feature gecko-like animals that have small bodies and long tails.

The sleek look of the Lizard Tattoo is highlighted when the animal is shown curled and contorted into shapes.

One of the most exciting pieces are those that are placed at a location on your body to create the illusion of living tattoos. This requires some knowledge regarding human anatomy in order for the tattoo to appear lifelike and accurate. The lizard foot tattoo is a popular placement.

If you are a fan of tribal tattoos and lizards, this is the ideal design for you. The tribal lizard incorporates both the style of tattoos while still highlighting the image of a lizard. Like many tribal tattoos, the pattern used is only one part and not done using more details like shading or color blending.

Lizard tattoos are often in the shape of a tribal. Putting on just one lizard, however, can add creativity and uniqueness to a tattoo. The tribal lizard blends well with other pieces of art that might be located on the chest or back.

Tribal markings play an important role in the development of indigenous cultures from all over the world. They can be used to reflect a person’s cultural identity and foster communication with ancestors.

Tribal tattoos featuring lizard designs come from cultures around the world, including those of the Haida and indigenous Polynesians.

Long before people knew the science behind them, they were beautiful. There is a long history of stories about salamanders in various cultures. They’ve been closely associated with fire since ancient times.

Leonardo da Vinci stated that the Salamander “has no digestive organs, and gets no food but from the fire, in which it constantly renews its scaly skin… in the fire,—for virtue.” A Salamander Tattoo therefore represents your passionate nature and your ability to pull through difficult situations relatively unscathed.

Gecko tattoos can be more than just car insurance coverage – they are symbols of new opportunities and have adapted to any surface or circumstance.

Geckos are well known for their ability to regenerate lost limbs. Seeing as how they also have traits like the ability to renew themselves and agility, will you find yourself closer to a gecko than one of the many other creatures?
Iguana Tattoos

Iguanas are delicious to eat in the Eastern Caribbean, and they’re also associated with many positive personality traits.

While the song Karma Chameleon was a hit among worldwide culture, it’s unclear what inspired the lyrics. Regardless, chameleons are not your average reptile.

A chameleon tattoo represents the ability to adapt to adverse circumstances.

Lizards are territorial reptiles. Male lizards have been seen fighting one another and even fight over the ability to mate with females.

A tattoo that contains both blue and red lizards set against a black background will make for an interesting piece of art. However, males preparing to fight one another are usually very colorful and vibrant.

Male lizards with vibrant and colorful colors have better chances of mating and getting into battles, where the brightly colored fighters typically win. Other lizards that are not as much brighter in color may find themselves sickly or unable to fight other animals for food or mates due to illness.

Greece: Due to the ancient Greeks’ affinity with Mercury, a deity who symbolizes rhetoric, trade and logic, lizards have been used as symbols for these concepts.

Australia: In Australian folklore it is called “generic character” so the image of this animal often appears in legends and fairy tales.

South America: Some South American tribes believe that the lizard is a symbol of sexuality and fertility. It acts as the patron of rain – the water element of the sky,as it symbolizes new growth and development.

Savic Countries: In the past, Slavs believed that lizards possess protective qualities. Therefore, they are often depicted in fairy tales as a pet with folkloric powers of warning men about impending disasters.

We hope that you learned more about the meaning of lizard tattoos and maybe got some design inspiration. Do you have a lizard tattoo? Let us know in the comments below.