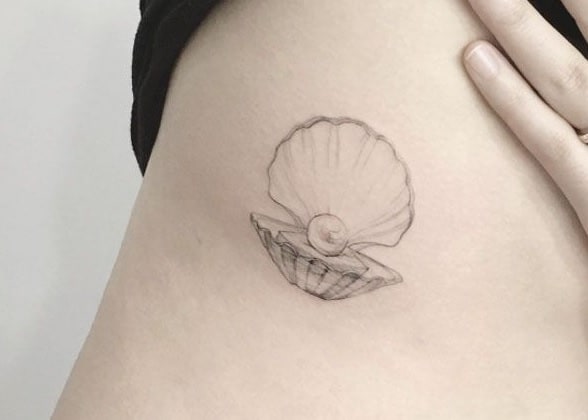 A pearl tattoo is an excellent way to represent something special in your life. Whether you received a pearl as a gift, or it holds significant meaning for your family, pearls are often the stuff of legends and fairy tales. What better way to show off this symbol of royalty than with ink on your skin? Read on to learn more about what they mean, their design options, and where you can find the perfect one for you!

What is the origin of the pearl tattoo?

Pearl tattoos were first used in ancient times, among tribes from Africa and Asia.

The Greeks also wore them as a symbol of purity because pearls were considered the “teardrops” of Aphrodite-the goddess of love, beauty and sexual rapture. In Europe during the middle ages they represented chastity. Many rock stars choose to wear them today for this reason, but with a modern twist!

What is the pearl tattoo meaning?

Pearl tattoos are most often associated with royalty or fairytales due to their cultural history in certain parts of the world. They represent wealth, beauty and purity because pearls come from freshwater sources, rather than being harvested from the sea like other gems such as diamonds and rubies (which is why they’re sometimes called ‘living’ stones).

The most prized variety comes from oysters found off the coasts of Australia and China, but there’s also freshwater varieties that come from mollusks in India, South America and the USA.

The meaning of different pearl tattoos also depends on what color it is. Here are the most common colors and their meanings:

Because there are so many different kinds of pearl tattoos out there it can be difficult to narrow down your options until you’ve found something that speaks to you personally. There’s the classic round or teardrop shapes which represent fertility or femininity; spiral designs which might indicate energy or growth;

Are pearl tattoos more common in women or men?

Pearl tattoos are more common in women, although they are becoming more popular with men as well.

The majority of the designs worn by both genders today can be traced back to ancient times, when tattoos were used for protection or strength in battle, rather than being purely decorative.

Yes, pearls represent innocence. During the middle Ages, pearls were considered symbols of purity and chastity.

The Greeks wore them as a symbol of Aphrodite-the goddess of love, beauty and sexual rapture. In Europe during the middle ages they represented chastity. Many rock stars choose to wear them today for this reason, but with a modern twist! They represent wealth, beauty and purity! They are associated with royalty or fairytales due to their cultural history in certain parts of the world.

Pearl tattoos have made their way into modern society via rock stars and celebrities who wear them not only because it expresses a belief system but also adds an element of mystery that many find appealing! The most prized variety comes from oysters found off both coasts.

Variations of the pearl tattoo

The most common variations of the pearl tattoo are:

The classic round or teardrop shape, which represents fertility or femininity.

The spiral design which indicates energy and growth.

What body parts are best for a pearl tattoo?

The best body parts to get a pearl tattoo are your back, ankles, neck, wrist, or shoulders.

The most common areas for men getting pearls tattoos would be on their wrists due to its size being about right for this kind of design. Women can have them on any part of their ankle, so long as it’s not covered up by socks while you’re wearing heals!

For women who don’t want something visible all the time there is also sleeve tattoos which will cover your entire arm with designs that start at your shoulder blade/back bone area and end at your elbow joint usually in one solid color but may include different shades depending what look you’re going for.

The pearl tattoo is a symbol of protection, love and wisdom. It’s no wonder that this lovely design has been popular for centuries! Whether you’re looking to commemorate the birth of your child or remember an important person in your life who passed away, the beauty and symbolism behind pearls make them perfect for any occasion.

We hope our blog post was helpful to you! If so, please share it with friends on social media. And if not – we’d still like to hear from you in the comments below.