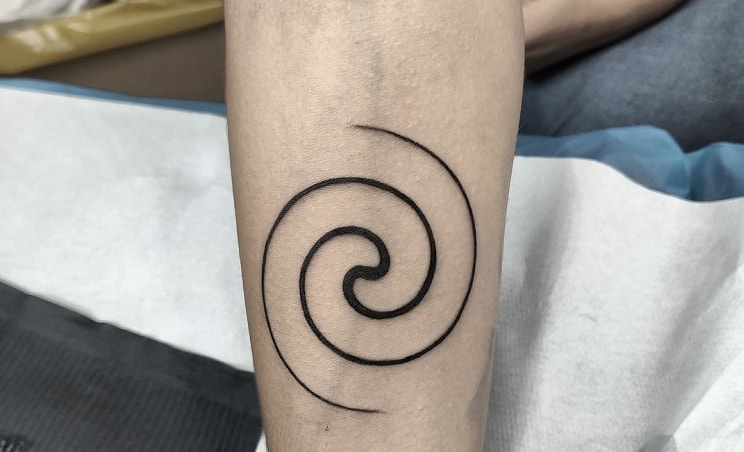 If you want to learn more about the spiral tattoo then you’re in the right place. Over the years spiral tattoos have gotten more and more popular.

In this article, we’ll go over the meaning of this tattoo, popular variations, designs, and pretty much every other question you could have!

What is the Meaning of the Spiral Tattoo?

The spiral is a symbol that can have many different meanings. It may be seen as the eternal and ever-turning cycles of life, or it could denote growth and evolution. It’s also been said to represent feminine energy, and in some cultures, it is used as a mystical symbol for protection against evil spirits.

The reason why the spiral tattoo has become so popular is that it can mean different things to different people. It may be seen as the eternal and ever-turning cycles of life, or it could denote growth and evolution. It’s also been said to represent feminine energy, and in some cultures, it is used as a mystical symbol for protection against evil spirits.

Some have even found that this particular tattoo helps them with their spiritual journey by showing how far they’ve come on their path of enlightenment! There are many ideas behind this type of design, but one thing remains consistent: you’ll want to choose an artist who specializes in custom work when choosing your spiral piece!

The Celtic Triad Spiral is a design that is based on the Celtic Triskele. It’s usually done in blackwork and it’s meant to symbolize past, present, and future.

This tattoo is the perfect choice for those who love astrology or simply want to include it in their ink. The star spiral design can be done with different elements and added colors. It’s also one of the more popular designs when it comes to tattoos! This type of design symbolizes hope, rebirth, guidance, spirituality, etc.

The Golden Spiral is probably the most common spiral design. It’s based on a mathematical ratio of Phi, which represents perfect growth and harmony in nature.

Spiral tattoos are very popular because they can have different meanings to people depending on their culture or personal beliefs. Spirals also come with many variations that you may want to consider when looking into getting this type of tattoo done!

The music note spiral is a popular choice for musicians or people who just love the sound of music. This spiral tattoo is usually done in color and it symbolizes unity, happiness, and harmony.

The Tree of Life is a symbol that was used in ancient times to represent the cycle of life, death, and rebirth. It’s also been said to be a representation of the connection between heaven and earth.

The Luna Goddess Spiral is a design that was inspired by lunar goddesses. It’s usually done in blackwork and it symbolizes the divine feminine energy, fertility, and wisdom.

Are Spiral Tattoos More Common in Men or Women?

This type of tattoo is usually more popular with women, but it can be seen on both genders.

The history of the spiral tattoo is a little bit unclear, but we can speculate that it’s been around for centuries. The spiral is a symbol that was used by ancient civilizations such as the Celts and Egyptians; they believed in its various meanings and power to protect against evil spirits.

In the past, spiral tattoos were often seen as a sign of sexual prowess and fertility. The Celts would use them to represent their goddesses and it has also been said that this tattoo was used by the Teutonic tribes for protection against evil spirits.

The spiral tattoo is a powerful and symbolic design with many different meanings. It has been used for centuries to represent the process of life, death, and rebirth. It also represents overcoming obstacles in your life, as well as spiritual growth. We hope this blog post helped you learn more about the history of spirals and what they mean!

If you’re thinking about getting one yourself or if it’s already on your body, we would love to hear from you below in the comments section. What meaning do you see when looking at a spiral?